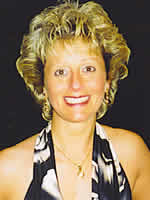 From the age of 17 until well into her thirties, Karen Baker suffered from terrible back problems.  She was in so much pain she could not sit on a chair and had to stand all day at work and stand when eating her meals.  Her condition defeated medical opinion and she tried everything including pain management programmes, osteopaths, chiropractors, and acupuncture.  A friend of her boyfriend suggested she phone and ex footballer Gerry Gurr who had also been cured by Paul with Ankylosing Spondylitis of the spine.   He told her to try Paul, as she had nothing to lose.  Karen attended a demonstration in Newbury.  Paul straightened her back and removed the chronic pain.   Paul has managed to solve her back problem to such an extent that she ran a five kilometer road race in 2003.  This has been an amazing turnaround in the fortunes of a young woman who could not sit, stand or lie down and was subjected to a continuous cocktail of pain killers.  Karen’s full testimonial can be found in “A Mere Grain of Sand”.